FIABA ONLUS is a non-profit association which aims to break down barriers, both architectural and cultural, which prevent people from enjoying and experiencing the environment in all its forms. It promotes universal access and the design of totally accessible environments according to the principles of Total Quality and Universal Design, aimed at social inclusion and equality which respects human diversity and is attentive to people’s needs, requirements and desires.

Since 2013, HBG Gaming has embraced and supported the mission of Fiaba Onlus to promote the removal of all physical, cultural, psychological and sensory barriers in order to spread a culture of equal opportunity to favour a totally accessible environment.

HBG Gaming believes that its corporate responsibility is to create value for the entire community. This is why we support social growth projects in partnership with highly qualified bodies with an exemplary reputation. This year, HBG Gaming has decided to finance the “Amatrice per una ricostruzione senza barriere” (rebuilding Amatrice without barriers) project, promoted by the FIABA ONLUS organisation, aimed at providing accurate information to allow Amatrice, the town which was heavily damaged by the devastating earthquake in August 2016, to be rebuilt without architectural barriers. These rules, which are outlined in the PdR/Uni guidelines Abbattimentobarrierearchitettoniche – LineeGuida per la riprogettazione del costruito in ottica Universal design (breaking down architectural barriers – guidelines for rebuilding according to Universal Design), have arisen from the partnership between FIABA, the CNGeGL (Consiglio Nazionale dei Geometri e Geometri Laureati) Italian surveyors’ association, and Italian standardisation body UNI (Ente di Unificazione Normativa).

In operational terms, a mobile information facility will be set up in the municipality of Amatrice which will work alongside the local institutions. A technical co-ordinator, supported by a team of volunteers selected with the involvement of surveyors from the Province of Rieti, will provide information to residents affected by the earthquake, completely free of charge. A control room will be set up for accessibility and total quality, which will have the job of co-ordinating and controlling the activities of making new constructions accessible.

The goal of the “Amatrice per una ricostruzione senza barriere” project is to avoid the errors which have occurred in recent years when rebuilding other towns struck by earthquakes, as outlined in the report from ANMIL (Associazione Nazionale Mutilati Invalidi Del Lavoro, Italian association for those injured and disabled by workplace accidents). This earthquake, while it will always remain a tragedy, must not also become a lost opportunity to rebuild the city as a comfortable and accessible environment, suitable for the entire diverse range of citizens.

HBG Gaming’s support of FIABA ONLUS and the start of the Amatrice project represents the company’s genuine commitment to improving people’s quality of life through constant work in the areas of mobility, design, reception, design for all, rights, transport, and accessibility, as well as creating tangible evidence of the company’s continuing growth and development of Corporate Social Responsibility.

For the fourth year running, HBG Gaming has sponsored FIABA DAY, a national day dedicated to social equality. The 14th edition of the event, which promotes a culture of equal opportunities, took place on the 2nd of October in Piazza Colonna , Rome.

HBG Gaming chose to sponsor FIABA Onlus in the fight against indifference and cultural and architectural barriers.

HBG Gaming confirmed its support for Fiaba Onlus in 2015 as well, by participating in the 13th edition of Fiaba Day, the “national day for the breaking down of architectural barriers”, held on 4 October 2015 in Piazza Colonna in Rome.

HBG Gaming provided support for Fiaba Onlus by participating in the 12th edition of Fiaba Day, the “national day for the breaking down of architectural barriers”, held on 05 October 2014 at Palazzo Chigi in Piazza Colonna in Rome. 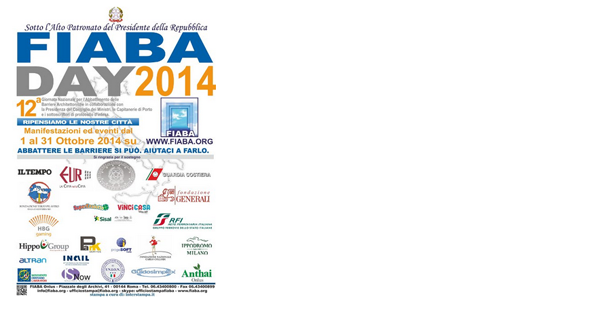 We also contributed to the fundraising by participating in the Benefit Concert of the Guardia di Finanza’s band, organised in support of FIABA Onlus.

On the 6th of October 2013, HBG Gaming stood alongside the association to hold Fiaba Day “Muovere il cambiamento!”, the “national day for the breaking down of architectural barriers”, founded in 2003 with a directive from the President of the Council of Ministers under the patronage of the President of Italy. An event with impressive numbers: 400 people visited the interior of Palazzo Chigi, greeted by officials from the Presidency of the Council of Ministers and Fiaba staff; there were ten consecutive hours of shows, debates and performances on the Fiaba Day stage, with impressive public participation; and on a national level, initiatives connected with Fiaba Day were held throughout the month of October, with the goal of informing and involving the greatest possible number of people to create an environment which is accessible and liveable for all.